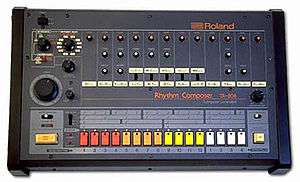 Drum and bass (/ˈdrʌm ənd ˈbeɪs/) (also written as drum 'n' bass and commonly abbreviated as D&B, DnB or D'n'B) is a genre of electronic music which emerged from rave and oldschool jungle scenes in England during the early 1990s. The style is often characterized by fast breakbeats (typically between 150–180 beats per minute) with heavy bass and sub-bass lines,sampled sources, and synthesizers.

The popularity of drum and bass at its commercial peak ran parallel to several other homegrown dance styles in the UK including big beat and hard house. Drum n bass incorporates a number of scenes and styles. A major influence on jungle and drum and bass was the original Jamaican dub and reggae sound. Another feature of the style is the complex syncopation of the drum tracks' breakbeat.

Drum and bass subgenres include breakcore, ragga jungle, hardstep, darkstep, techstep, Neurofunk, ambient drum and bass, liquid funk, deep, drumfunk, funkstep, sambass dnbnoise and drill and bass. From its roots in the UK, the style has established itself around the world. Drum and bass has influenced many other genres like hip hop, big beat, dubstep, house music, trip hop, ambient music, techno, rock and pop. Drum and bass is dominated by a small group of record labels. The major international music labels have shown very little interest in the drum and bass scene. Drum and Bass remains most popular in the UK, but has developed scenes all around the world, in countries such as the Netherlands, Belgium, New Zealand, Canada and Australia.